Since our last update in June 2019,1 we have continued to see important developments in:


The trend towards increased regulatory activism in the wake of the Banking Royal Commission has continued as predicted and put increased pressure on companies and their directors and officers.


The community concerns and issues arising from the recent and tragic bushfires are also likely to maintain the past momentum for increased levels of community activism, corporate accountability, investigation and regulation of Australian corporate and public life.


There trends have meant D&O liability insurance claims have continued to be on the rise, with claims far exceeding the insurance market premium pool. As a result, and coupled with a hardening insurance market in general, we are seeing major increases in premiums and restrictions on the scope of coverage.


But it is not all bad. Two landmark decisions handed down last year in the class action sphere have created undesirable uncertainty; but have the potential to slow down the rising numbers of shareholder class actions and the ready availability of litigation funding.


The trend towards increased regulatory activism that we have seen since the Royal Banking Commission has not slowed down. We expect this will be a key risk area for companies and their directors and officers for the foreseeable future. Australia has been labelled globally as one of the most regulated countries, and with a raft of new regulations in the pipeline, companies will continue to grapple with the pressure and rising costs associated with compliance. For instance:


During last year, there were several decisions which altered the law around: litigation funding, common fund orders and how multiplicity of actions should be handled. These decisions have created uncertainty, which overall may well slow down the perceived “trend” of increasing numbers of class actions, especially by shareholders. However, we expect those developments and the uncertainty they have created, legally and commercially, to quickly evaporate and in the long-term, probably not produce much change. Each of these factors is considered in more detail below.


In the last few years, the availability of litigation funding has been increasing with an influx of international funders to Australia, given the country’s perceived reputation as a relatively easy jurisdiction to bring a class action and the well-developed funding model. In light of recent case law developments creating uncertainty for funders (discussed below), there is a real query as to whether litigation funding will remain as readily available in the future. The viability of shareholder class actions is heavily dependent on funding, and so we would expect such actions to slow down if funders were to exit the Australian market.


There is also a real query as to whether there was ever a real trend of rising numbers of class actions. A report published in November 2019 casts doubt on the claim that there has been an explosion of class actions, particularly shareholder class actions. The report relevantly provides the following statistics over the last 27 years (the review period): 5


As to shareholder class actions in Australia:


As noted above, since our last update, two landmark judgments were handed down which have the potential to decrease the attractiveness of class action proceedings for both plaintiffs and litigation funders:

In addition to the case law developments highlighted above, the Courts have been increasingly in support of permitting only one of multiple competing class action proceedings to continue.9 The Court found in favour of a “no win no fee” model when assessing competing class actions brought against AMP following the Banking Royal Commission.10 Again, in the short-term, this decision casts uncertainty over litigation funders’ models and expected returns.


Remaining uncertainties and changes ahead


Of course, the potential impact of those decisions on the class action market in Australia should not be overstated. The government could amend the relevant legislation to make it clear that the Courts have the power to make CFOs at the outset or there may well be other powers that the Court can use to reach a similar result, as indicated by the Federal Court (which no doubt will be tested in Court at some point).


It is also worth noting that Victoria introduced a bill allowing plaintiff lawyers to be paid a contingency fee, which can be shared amongst group members and lead plaintiffs proportionally. This will likely make Victoria an attractive jurisdiction for plaintiffs to commence class actions.


All in all, it is too early to tell how significant the effects of these developments will be and how some of the uncertainties discussed above will be resolved. In the short-term, we don’t expect to see any material change in the risk that companies and their directors face.

The insurance market in Australia overall is hardening, with rates going up across all lines. The recent tragic bushfires will exacerbate the situation.


Although a broad generalisation, we understand from our clients that while ASX 200 companies used to be considered good risks and would be welcomed by most insurers, they are now facing extraordinary premium increases for D&O cover. This is largely attributable to the burgeoning class action litigation and increased regulatory activism in Australia, leading to the D&O market facing claims that far exceed the premium on the books.


As shown in the figure below,11 the Pacific region has seen close to a 19% increase of composite pricing in the third quarter of 2019, in line with the trend that has occurred for the last three years, which is said to be driven primarily by D&O and property rates. 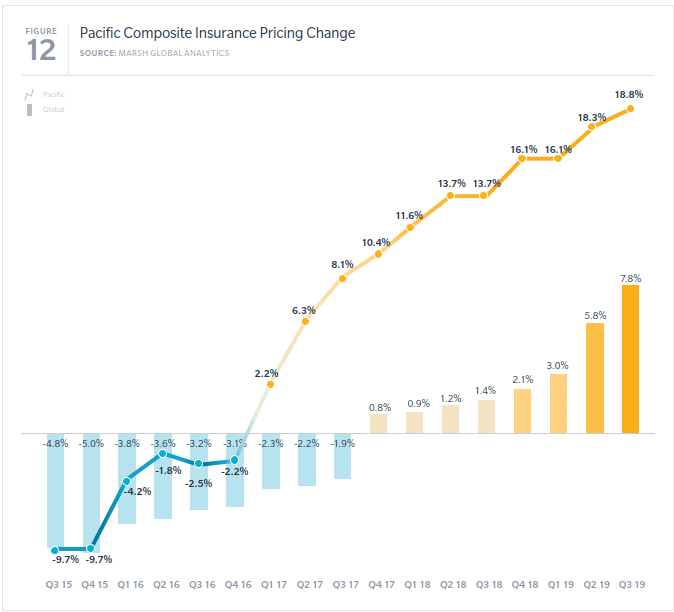 We have also seen a trend whereby the Courts are increasingly willing to use their broad case management powers to order disclosure of defendants’ D&O insurance policies in the context of class actions.12 The limits of disclosure have not yet been tested, but in at least one case the Court showed a willingness to order disclosure of an insured’s notification of circumstances/claim letter to their insurer, in addition to the insurance policy itself. Such disclosures would obviously confer a strategic advantage to plaintiffs in conducting recovery actions. We expect the trend towards disclosure to be seen by insurers as yet another example of Australia being an undesirable market, especially for D&O cover.


Interestingly, a decrease in the availability of D&O insurance, coupled with transparency as to the lower limits arising from the disclosure of D&O policies to plaintiffs, may lead to a decrease in the number of shareholder class actions being commenced – especially in conjunction with the recent developments in class action litigation noted above. In turn, this could ease the D&O insurance market in future.


From 1 July 2019, significant changes to the whistleblower regime under the Corporations Act 2001 took effect,13 affording greater protection to whistleblowers reporting misconduct. While the reform will create further pressure on companies in terms of ensuring compliance and updating internal policies, the reform will provide reassurance to directors that risks may be brought to their attention in a timely manner.


The new regime notably broadens the scope of who can make and receive a protected disclosure and what information will qualify for protection. The regime also increases the penalties available for breaches.

Climate change litigation is on the rise globally, including both as a tool to influence policy making, and as a means to change corporate behaviour. In terms of total number of cases brought before May 2019, Australia comes second in the global rankings (with 94 cases), behind the United States (with 1023 cases). By comparison, 55 cases were commenced in the European Union and 53 in the United Kingdom.14


There is a risk that such litigation – as has been the case in the United States – will increasingly target corporates, for example for a failure to disclose climate risk or incorporate climate risks in its decision-making process.


When it comes to risks arising from climate change and new technologies, the insurance industry has been slow to offer cover. This may be related to the hardening market, and a desire by insurers to see how these areas evolve. We expect this will be a developing area, so watch this space.