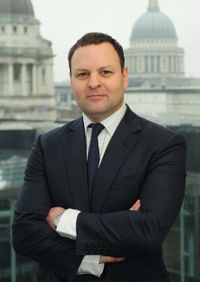 Richard East was the founding and is now the senior partner of the London office of Quinn Emanuel. He previously co-managed the firm for 11 years.

A highly rated and experienced solicitor advocate with a heavyweight litigation and arbitration practice spanning over two decades. Richard has been ranked by Legal 500 in the Hall of Fame for Banking Litigation (2020 - 2023) and Commercial Litigation (2023). He is also ranked as a Recommended Lawyer for Corporate Restructuring & Insolvency and Reputation Management. Richard has previously been described by Legal 500 as an “savvy and astute litigator” and a “consummate tactician” (2022), a “legend in the London market (2021), “highly rated”​, “very talented”​ (2015), a “creative and highly skilled litigator”​ (2014), “a clever and motivated practitioner” (2023), a “talented and creative adviser”​ (2013), and “tremendously hard-working”​ (2012).

Previously, Chambers noted that “clients appreciate Richard East for his capabilities as a litigator and great experience in the financial sector. He is an excellent choice of representation for complex banking disputes involving claims of fraud and financial mis-selling” (2022). “Richard is so fantastic and committed to his clients” as well as “practical and clear in the advice he brings on complex matters” (2022). Richard is described as “a great tactician and a good strategist” (2020) and that he comes highly recommended for his “phenomenal client coverage skills” and his “very hard-working” manner (2018). Also described by Chambers as a “skilled litigator “ (2020), “widely admired”, “very driven” and “a pure litigator” (2015) and as having a “commercial mindset” and being “very good on the substance of the law” (2014). “Richard East receives wide acclaim from a range of sources for being an excellent litigator who fights your corner, is commercial and provides invaluable assistance.” (2017).

Richard has been repeatedly selected for inclusion in The International Who's Who of Commercial Litigators as a "Recommended Commercial Litigator"​ from 2013 to 2022. Additionally, he was named by Financial News as one of the “50 Most Influential Lawyers”. Richard also featured in The Lawyer's Hot 100 2012, a prestigious recognition for individual lawyers in England.