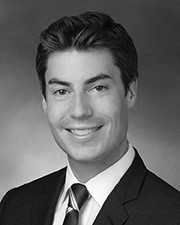 Patrick Stafford is an associate in Quinn Emanuel’s Washington DC office.  He joined the firm in 2018.  His practice focuses on intellectual property disputes, including patent infringement, patent licensing, trademark, and trade secrets.  He has a degree in Electrical Engineering from the Pennsylvania State University and has applied his technical training to patent litigation matter involving technologies such as semiconductors, power controller chips, mobile device software, light-emitting diodes, sensors, signal processing, and data processing.  Patrick has tried cases in federal courts throughout the country, before the U.S. International Trade Commission, and appeals to the U.S. Court of Appeals for the Federal Circuit. He also prosecuted patents in the electrical, mechanical and business method arts before the U.S. Patent and Trademark Office and foreign patent offices.  While in law school, Patrick served as vice president of the George Washington University Law School’s Moot Court Board. Prior to and during law school, Patrick worked as a primary patent examiner at the United States Patent & Trademark Office, focusing on semiconductor, lasers, and optical communication technologies.

The State Bar of Virginia ;The District of Columbia Bar; Registered to practice before the United States Patent and Trademark Office