Class Actions in Australia: Two Reviews. “Some aspects of the proposed settlement of this matter may give rise to the perception … that the only real ’winners’ in this litigation were the lawyers and the litigation funders. …” - HFPS Pty Ltd (Trustee) v Tamaya Resources Ltd (In Liq) (No 3) [2017] FCA 650 at [126].

It is said by global insurers and litigation funders that Australia has become one of the hottest spots on the planet for class actions. It is against this perception – locally and globally – that two inquiries into class actions have been commenced in Australia. First, the Victorian Law Reform Commission started an inquiry in December 2016 into issues concerning litigation funding and the use of class actions. The report from that inquiry, which was completed on April 3, 2018, is expected to be published shortly after it is tabled in the Victorian Parliament. The inquiry is similarly looking into class action proceedings and the use of third party litigation funders at a federal level, and is expected to release its report by December 21, 2018. Both inquiries are focusing on (among other things) the ways in which the class action system can better protect the interests of group members, including in the context of the distribution of settlement amounts.

However, is the premise (and criticism) around class actions and the distribution of settlement amounts to class members (particularly in funded class actions) valid? Namely, does the available data gathered from the settlement of recent Australian funded class actions empirically and objectively support this position and in turn, the likelihood of legislative change?
To set the context, it will be useful to briefly outline some statistics that underlie the expansion of funded class actions in Australia. Professor Vince Morabito over the last year released an empirical study into Australia’s class action regimes, and relevantly observed the following:

We have analyzed the settlement of recent Australian class actions (and in particular, the distribution of amounts for legal costs, funding commissions and group members), which we set out in the following table: 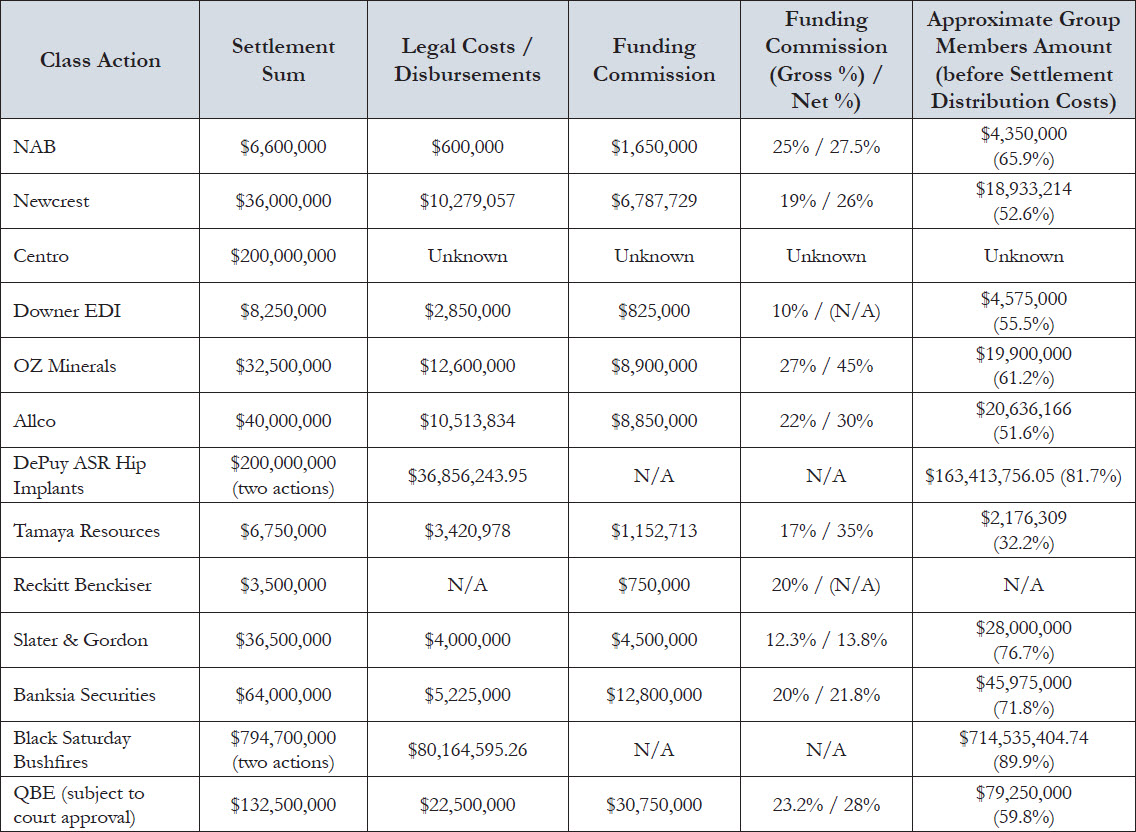 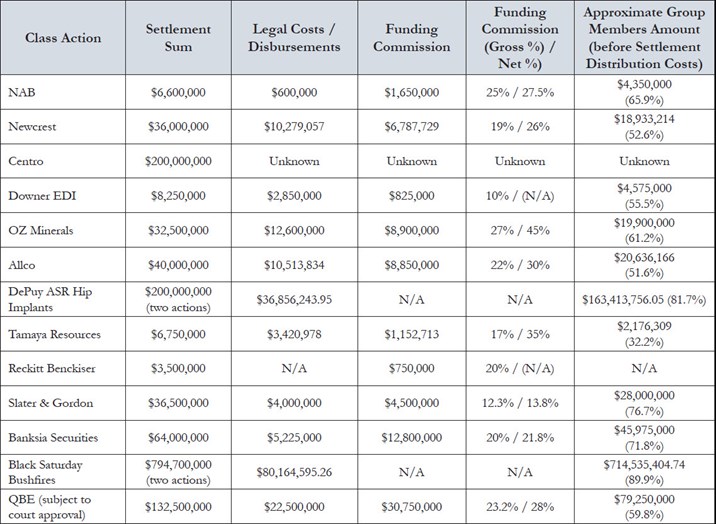 Based on this available data, we can discern the following:

It should be kept in mind that the above statistics do not account for the ongoing costs of administering settlement funds, which can sometimes run to many millions of dollars (depending on the size and complexity of the class action). Nevertheless, what we can draw from this data is that, to the extent that critics have asserted that class members have been severely disadvantaged in funded class actions, that position is perhaps overstated.

Further, mechanisms do exist to protect the interests of class members. The chief among them is judicial supervision of the settlement of class actions. In all Australian jurisdictions, a court needs to be satisfied that the overall settlement is fair and reasonable, having regard to the interests of all class members, before it will approve a settlement. Other protective mechanisms available include: the appointment of a contradictor for the hearing of a settlement approval application; the appointment of special referees to review costs; making provisional orders regarding the distribution of funding and legal costs (particularly in the context of competing class actions); the use of common fund orders, which may regulate the quantum of funding commissions; and the increased involvement of defendants in settlement hearings.

These points notwithstanding, there is clearly room for the class action system to be improved, in order to better protect the interests of class members. As a result, the outcome and recommendations of the two inquiries that are presently underway in Australia will be worth monitoring; both for plaintiff and defendant businesses and investors alike.