Want the AI Bulletin mailed to you?

Background.  In October 2020, the USPTO’s Office of the Chief Economist released a report showing AI-related patents are growing across a broad range of technologies, organizations, inventors, and geographic areas.  To study the acceleration of the importance of AI, the USPTO developed an AI algorithm to gauge the impact that AI has had on patents and, by extension, technological progress more generally.  The key findings of the report show the broad diffusion of AI across several metrics: 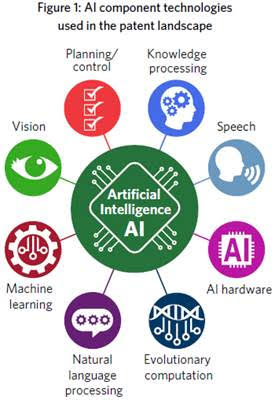 The USPTO’s analysis found that planning/control and knowledge processing represent the largest share of AI components in patents between 1990 and 2018, each with approximately 40,000 patent applications incorporating one or both of those components.  These two components often overlap with each other or with other components, as they are the most general and can be applied to a wide variety of technical areas.  In general, the USPTO analysis found significant overlaps, especially among related component technologies such as natural language processing and speech. 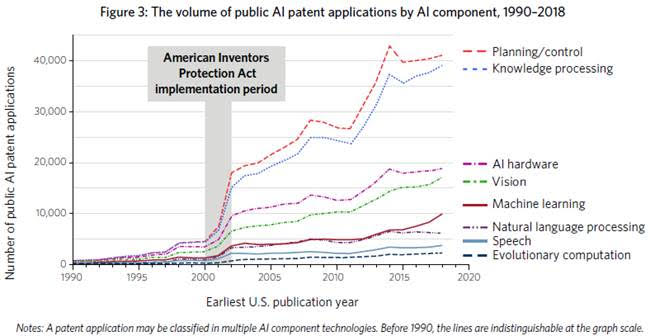 As one example of the interplay between component technologies, growth in machine learning, vision, and AI hardware—the latter serving as the underlying computational power for increasing advances in the former two component technologies—has accelerated since 2012.  Part of this rapid growth is attributed to the recent rise of autonomous vehicles, which heavily rely on advances in vision and, relatedly, AI hardware.

Diversity of owners-at-grant of AI patents.  The USPTO analysis found some counterintuitive AI patent owners-at-grant among the top-30 in the United States.  While most owners-at-grant are in the information and communications sectors, there are several companies in other business areas: global multinationals involved in aviation and aerospace (Boeing), building technologies, healthcare, energy, and manufacturing (General Electric and Honeywell), photography and imaging (Eastman Kodak), and venture capital and finance (Bank of America).

Geographic Diffusion.  The USPTO found that typical technology hubs such as Silicon Valley have large concentrations of AI patent inventors, as do areas with major research universities, likely due to their resource advantage with respect to specialized knowledge relating to AI.  However, other areas of the United States have become specialized in certain AI sub disciplines.  Inventors from Oregon, home to Nike, have been active in AI patents relating to fitness training and equipment.  States in the Midwest, including Wisconsin, Ohio, and Kansas, are home to inventors applying AI technologies to medical imaging and diagnostics.

AI Abroad.  The USPTO’s conclusion that AI technologies are rapidly becoming common in a variety of contexts is confirmed by international studies on the rise of AI patents.  The Canadian Intellectual Property Office concluded that the “number of worldwide AI patented inventions has increased exponentially over the past 20 years.”  The China Institute for Science and Technology Policy at Tsinghua University found “an overall upward trend on an application number consolidation basis over the last nearly 20 years.”  The European Patent Office found that AI is among the “fastest-growing fields” in Europe.  The World Intellectual Property Organization found that since the emergence of AI in the 1950s, nearly 350,000 AI-related patent applications have been filed, with nearly half published since 2013.

UPDATE ON THE PLANNER5D LITIGATION

Want the AI Bulletin mailed to you?