On January 9, 2021, the Chinese Ministry of Commerce (the “MOFCOM”) promulgated a new regulation, titled the Rules on Counteracting Unjustified Extra-territorial Application of Foreign Legislation and Other Measures (the “Counteracting Rules”) [1], which came into effect immediately.  As elaborated below, this regulation will likely have major impacts on multinational companies that conduct or used to conduct business with Chinese companies that are subject to various sanctions and/or export control programs. In particular, multinational companies’ Chinese subsidiaries may be subject to orders by Chinese authorities that require them to disregard non-Chinese sanctions/export control programs or face administrative penalties in China; further, multinational companies that stop doing business with major Chinese companies because of sanctions/export control program may be exposed to litigation risk in China.

Background
Styled as the equivalent of EU’s blocking statute, the Counteracting Rules are intended to empower the Chinese government to review any extra-territorial application of foreign laws and executive actions that have the effect of “prohibiting or restricting Chinese companies or individuals from engaging in normal economic, trade and related activities with a third state (or region) or its companies or individuals” (the “Extra-territorial Measures”).

The Counteracting Rules are reportedly one of several steps that China is taking in response to the U.S.’s escalating sanctions and export control measures against Chinese companies and individuals, as well as U.S. courts’ and enforcement agencies’ long-arm jurisdiction.  For instance, China has recently (i) established its own Unreliable Entity List regime, under which blacklisted companies or individuals can be restricted or even banned entirely from trading with China, and (ii) published its first export control law, which introduced various control mechanisms that resemble certain aspects of the U.S. export control regime.

Responsible Authority
China will establish a “working mechanism” composed of representatives of multiple departments of the central government and led by the MOFCOM as the governmental body responsible for implementing the Counteracting Rules (the “Working Mechanism”).  China has yet to announce what other departments will be part of the Working Mechanism besides the National Development and Reform Commission (the “NDRC,” an economic regulator traditionally with broad power over economic policies, especially over antitrust issues).

Reporting Obligation and Prohibition Order
Any Chinese company (including Chinese subsidiaries of foreign companies) or Chinese individual who becomes subject to Extra-territorial Measures is obligated to report to MOFCOM of such restrictions within 30 days, failing which, administrative penalties maybe imposed by MOFCOM.  Such reports shall be kept confidential if so requested.

The Working Mechanism led by MOFCOM will then review the reported measures to determine if they are justifiable, by considering the following factors in totality:

The Working Mechanism has the right to suspend or withdraw the Prohibition Order from time to time. Chinese companies (including Chinese subsidiaries of foreign companies) and individuals may also apply to MOFCOM for exemption from compliance with the Prohibition Order. In other words, once a Prohibition Order regarding an Extra-territorial Measure (such as a U.S. sanctions program) is adopted, one needs an affirmative exemption from the Chinese authority in order to comply with the underlying sanctions to avoid the consequences of violating the sanctions.

When asked whether the first Prohibition Order is already on its way, a representative of MOFCOM did not confirm one way or the other.  But it is possible that there are Extra-territorial Measures that are already being considered by the Chinese authority and we may see a series of Prohibition Orders in the near future.

Remedies
Once the Working Mechanism adopts a Prohibition Order, the Chinese companies or individuals that are subject to the Extra-territorial Measures will have two types of remedies.

First, if Chinese companies and individuals suffer significant losses from disobeying the Extra-territorial Measures because of the Chinese authority’s Prohibition Order, the Chinese government will consider providing them with “necessary support” on a case-by-case basis.  The nature of the support has not been specified.  It is possible that the government support would take a variety of forms designed to specifically relieve the affected companies or individuals from the effect of the Extra-territorial Measures.

Second, and more importantly, Chinese companies and individuals who suffer losses can also file a lawsuit in Chinese courts for compensation against any of the following parties:

So far, the Counteracting Rules did not provide any further details about how such lawsuits shall proceed, the standard of proof, etc., but we believe that proof of actual damages and loss causation are likely required.  This provision has the potential of subjecting non-Chinese companies who act in compliance with a non-Chinese sanctions program to liabilities in Chinese court, if the affected Chinese company or individual could prove damages.  For example, we can envision a scenario of a Chinese company or individual suing a U.S. financial institution for freezing its U.S.-based assets in compliance with U.S. sanctions laws.

Counter Measures
The Counteracting Rules further provide that the Chinese government shall have the right to take necessary “counter measures” in response to the unjustifiable Extra-territorial Measures based on the specific circumstances.  The kinds of “counter measures” are not specified in the Counteracting Rules, but what China has already adopted, such as its own Unreliable Entity List and export control law, would serve as good examples.

Below is a flow chart illustrating how the Counteracting Rules would operate. 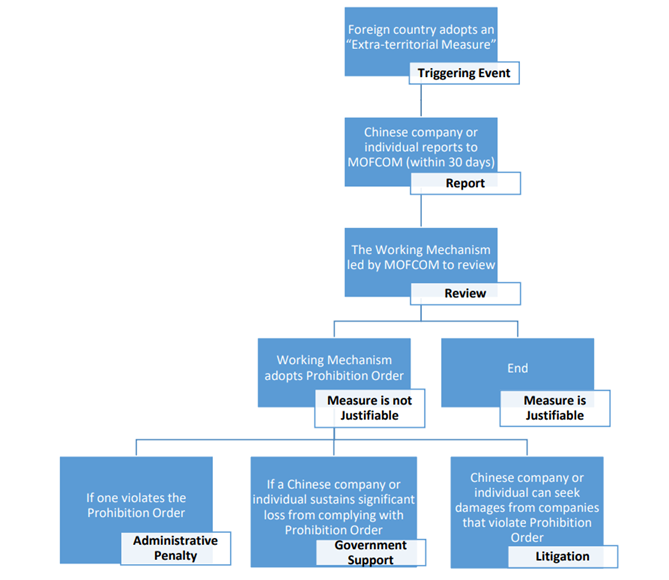 [1] An English version of the Counteracting Rules published by MOFCOM is available here for reference purposes only.

If you have any questions about the issues addressed in this Client Alert, or if you would like a copy
of any of the materials we reference, please do not hesitate to contact us: